Unfortunately, technical terms cannot always be avoided. In our solar power storage glossary, you will therefore find a variety of terms briefly explained and sorted alphabetically.

The ampere is the SI base unit of the electric current. Its unit symbol is A.

Active power is the electrical power available for conversion to mechanical, thermal, or chemical power.

During a public grid failure, a power storage system with a back-up power function will independently switch over consumers from grid supply to the in-house storage system. After a time lag of a few seconds, the storage unit or the PV system will supply selected consumers with power. The PV system continues to generate solar power. Surplus energy is stored in the power storage unit. Back-up power is not suitable where an uninterruptible power supply (UPS) is required.

A device that stores energy is generally called an accumulator or battery. Batteries that consist of an electrochemical cell or a combination of cells are broadly used. They come equipped with the required connectors and protective devices for safe usage.

The state of charge (SoC) of an electric battery is the current level of charge relative to its nominal capacity. The units of SoC are percentage points. If the battery is fully charged, it is 100 %, if it is empty, it is 0 %.

The battery management system (BMS) is the key essential electronic component of a power storage unit. It monitors the computed "State of Charge" (SoC) during charging and discharging. It also acts as an interface between the device and the battery. Its sensors measure the currents, voltages, temperatures of the individual cells and of the entire system and are partly used for control. measured and partly also regulated. The BMS is a central safety component of the power storage unit.

The ability of a power storage unit to store an electric charge is referred to as its capacity. The measurement unit is the ampere hour (Ah).

The charging current refers to the amperage with which a battery is charged. It is also common practice to use the rate of C-rate to describe the charge and discharge of batteries. It is defined as the charge or the discharge current (in A) divided by the battery's capacity to store an electrical charge (in Ah). The rate 1 C would theoretically fully charge or discharge the battery in one hour. Typical charging and discharging may occur at C/2 (two hours for full capacity).

The control speed is the elapsed time before the power adjustment of the storage system starts after switching on a consumer. It is comprised of dead time and settling time and should preferably be as low as possible as it affects the power storage system efficiency.

In DC-coupled systems, the power storage system is connected directly to the PV modules. A conversion into direct current (DC) for storage is not necessary. DC-coupled electricity storage systems are particularly suitable for new PV system installations.

The discharge current refers to the amperage that a battery can deliver over a defined period.

The efficiency (η) indicates how well photovoltaic components such as solar panels, inverters or power storage units perform stating their energy conversion losses. In theory, efficiencies can range from 0 to 100 per cent. In real terms, 100 per cent efficiency is impossible as there will always be energy conversion losses within the components that cannot be recovered, e.g. sunlight into electric power. Efficiencies are usually expressed as mean values or weighted mean values. In general, the higher the efficiency, the more efficiently the PV system and the power storage system operate.

The effective or usable storage capacity is, in practice, the significant parameter of a power storage unit. It indicates how much energy can be withdrawn considering the maximum permittable depth of discharge.

A full cycle is when a battery is fully discharged and then fully charged.

The operating mode of a solar power storage system at limited storage capacity should create the maximum benefit for the user and provide the maximum possible stabilisation of the power grid. It is termed grid-serving.

If a PV system is set up to always charge the power storage system when the generated solar power exceeds the household self-consumption, the storage system would frequently be fully charged before noon when the PV system has its peak output. It is not grid-serving and likely to overload the grid.

To avoid this scenario, the charging process should be controlled to charge the power storage system around peak solar radiation. The exact timing can, neither for all installed PV systems nor for the individual storage system, be predicted with absolute certainty due to variable weather patterns. The forecast-based charging method of RCT Power's storage systems tracks the ideal time to charge and enables grid-serving operation.

Power storage units with high-voltage batteries have a high output voltage and high efficiency. It leaves the inverter to bridge only a small voltage difference. The battery can, due to its high voltage level, be connected directly to an intermediate circuit of the inverter.

Lithium iron phosphate-based battery cells (LiFePO4 or LFP) belong to this group of batteries. They have excellent performance features and are durable and safe. They have high cycle stability and can therefore be charged more frequently while at the same time delivering higher charge and discharge capacities.

LFP battery cells do not use problematic and questionable cobalt as a raw material. The use in power storage units is judged to be non-hazardous, and above all, non-toxic.

The optimal load characteristic of a solar cell providing the highest power transfer is called the maximum power point (MPP). It is not constant and depends on external factors such as available sunlight and the solar panel temperature.

The nominal storage capacity equates to the amount of energy that can be withdrawn from the power storage unit under certain conditions.

The nominal voltage is the voltage a consumer or device is designed to operate with. The correct nominal voltage must be used for a PV system to deliver its specified power output.

In a partial cycle, a battery is only incompletely discharged or charged. To calculate the total number of charging cycles, partial cycles can be added up and combined into full cycles.

Photovoltaics is a collective term for the environmentally friendly way of generating electricity from sunlight. It exploits the physical phenomenon that sunlight can create a voltage between two selected semiconductors. Roofs of detached houses are an ideal location for the installation of a photovoltaic system.

To protect power grids from overload, power output from photovoltaic systems must be able to be remotely regulated or set up to only feed in 70% of the installed system output. If excess solar power cannot be fed to the power storage unit or to a connected consumer it must be curtailed. The result is regulation losses.

Self-consumption means that the owner of a PV system uses the generated solar power directly and does not feed it into the public power grid. It is fed directly from the PV system to the connected consumers or temporarily stored in a solar power storage unit.

Self-sufficiency in power supply stands for the independence of the public power grid. The more self-sufficient a household is in its power supply, the less energy it requires from energy suppliers.

A PV system can only generate the full specified power if the solar radiation reaches the solar panels unobstructed. In practice, however, objects on the roof, such as chimneys, satellite dishes or vents, will lead to partial shading of the solar panels and create a yield loss. An inverter integrated shading management system can reduce the yield loss to a minimum and make using module optimisers redundant.

Single-phase inverters are only rarely used in Germany. They might still be installed in small PV systems. They are likely to present obstacles to future upgrades and modernisation and are not recommended.

Solar power storage units are large rechargeable accumulators (batteries) for solar power. They allow us to store solar energy and use it when required. Energy generation and consumption are temporally decoupled. Solar power storage systems enable the efficient use of photovoltaic systems, which generate most of their electricity during the midday hours. The storage systems can compensate for the increased power demand in the evening hours caused by lighting and electrical appliances. 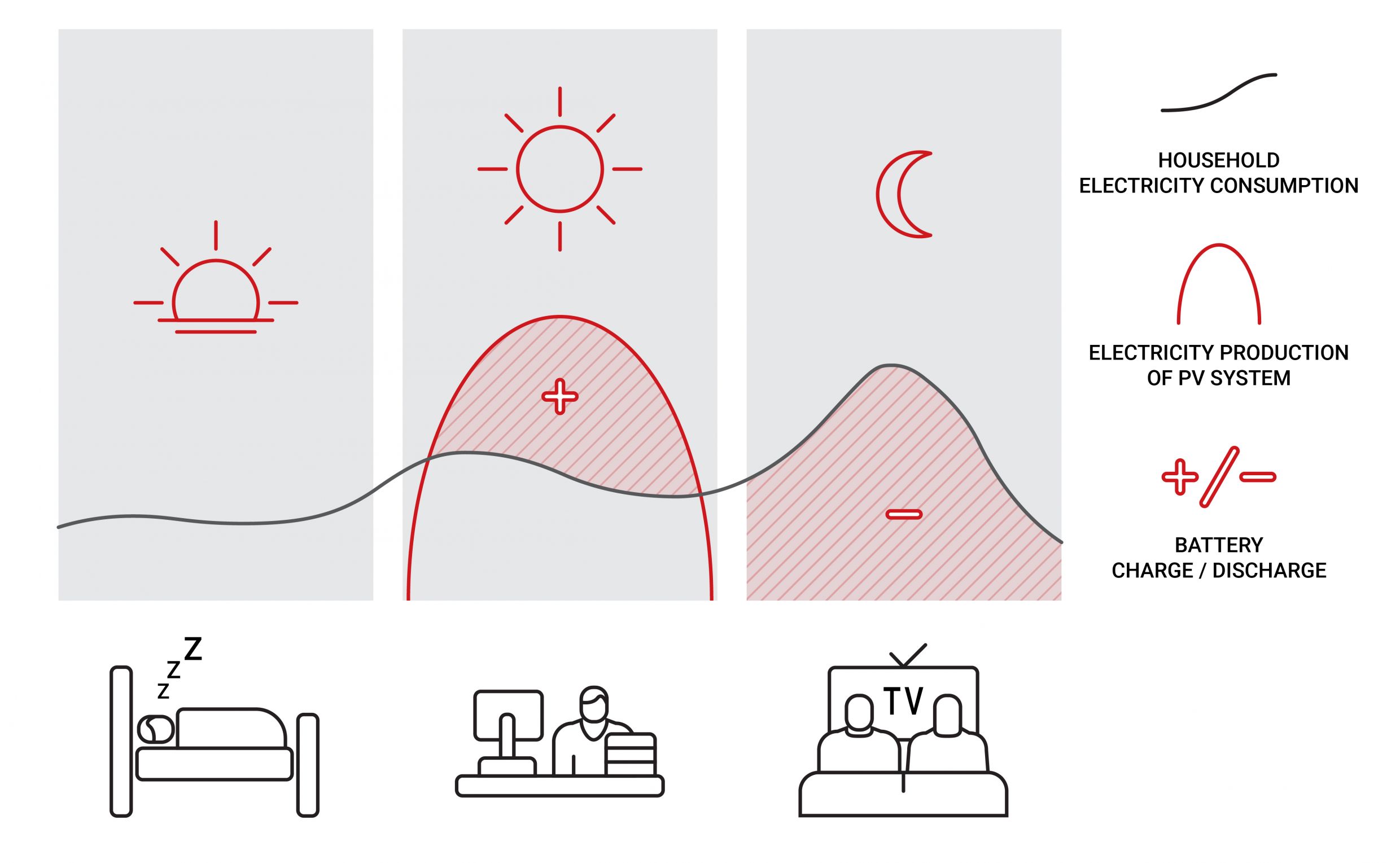 State of charge refers to the current level of charge of a battery in relation to its maximum capacity in per cent.

One of the most essential parameters of a power storage unit is its storage capacity. It indicates how much energy at nominal conditions can be withdrawn from the unit. The storage capacity is specified in kilowatt-hours (kWh). We distinguish between gross capacity (nominal capacity) and net capacity (usable capacity).

The inverter of a three-phase power storage system connects to the household grid via all three phases. The application rule (VDE-AR-N 4105:2018-11) for the operation of PV systems mandates a general limit of 4.6 kilovolt amperes (kVA) per phase to avoid uneven loading of the outer conductors of a three-phase AC power system. Therefore, individual inverters with a rated power greater than 4.6 kVA may not be connected to a single phase. If the power of the PV system exceeds 4.6 kVA, a 3-phase inverter must be used. The trend points clearly towards the deployment of 3-phase inverters.

The volt is the derived SI unit for the electrical voltage. The unit symbol is V. 1000 volts are equal to one kilovolt (kV).

Electric voltage is separated into two main voltage ranges. Voltages above 1000 V are called high voltage. Voltages below 1000 V are referred to as low voltage.

Physical formula: P = U x I

A commonly used multiple of a watt is a kilowatt. 1 kilowatt (kW) equals 1000 watts (W). The letter P is the formula symbol for power and is an abbreviation of "power".

Watt-hour (Wh); kilowatt-hour (kWh)
A watt-hour is a unit of work or energy. The unit symbol for watt-hour is Wh.  One watt-hour equals the amount of energy that a system with a power of one watt consumes or delivers in one hour. A kilowatt-hour is abbreviated as kWh, where kW stands for kilowatt and the h is the abbreviation of the Latin "hora".
An energy generator or consumer with 1 kW of power in operation for one hour generates 1 kW x 1h = 1kWh of energy or converts it into heat.
With one kilowatt-hour, for example, you can:
• Use a vacuum cleaner rated at 1000 W for one hour.
• Light a 12 W energy-saving bulb for about 83 hours.
• Use a 1400 W rated hairdryer for about 43 minutes.
• Work on a 20 W rated laptop for about 50 hours.
Energy suppliers use kilowatt-hours in their consumer energy billing. The letter W is the formula symbol for work/energy and is an abbreviation of "work".
Zero feed-in system

A zero feed-in solar system either exclusively supplies the household power grid with the generated solar power or stores it in a power storage unit. No surplus solar power is fed into the public grid.